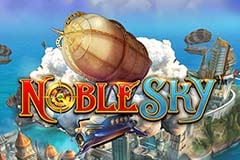 Microgaming, one of our most famous software providers, developed the Noble Sky slot machine. This developer has been a pioneer in the industry since 1994, and their portfolio includes a long list of excellent games. Microgaming slots are known for their entertaining themes and large jackpots.

The symbols change as the reels float above the city. The slot is themed in the Steampunk genre and can be played for 0.25 to 50 credits per spin. There are five reels, three rows, 25 fixed pay lines, a multiplier trail, re-spins, and static jackpots.

The high-value icons in this game are made up of a variety of characters. A man, two ladies, a hat, and a compass can all be found there. The A, K, Q, J, and ten icons are low-value symbols.

How to Play the Noble Sky Online Slot:

The betting range is 0.25 to 25.00 per spin, which should suit most budgets but may be too low for high rollers. For each of the 25 pay lines, it ranges from 0.01 to 1.00; you’ll win if three or more of the same symbol appears across a line from the left side.

It’s simple to get started, and with only a few clicks on the Plus and Minus wager control buttons, you’ll be spinning the reels in no time. You can access the paytables by clicking on the three dashed lines to the left of the main controls, and fast-play and automatic spins modes are available. Here you’ll find more information about the bonus features, as well as a detailed rundown of how much you can earn from different symbols. 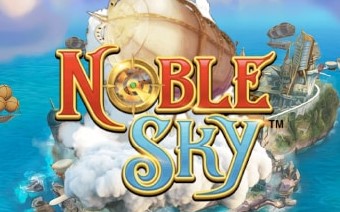 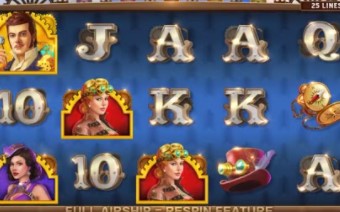 There aren’t many extras in this airship extravaganza, but few are worth mentioning. Re-spins with stacked wilds and multipliers will help you win more in the base game. For a chance to win the jackpot, trigger the Vault bonus.

There are no separate free spins rounds in this game, but you won’t miss them because the respins feature is so amazing. The symbol for an airship is wild. When this symbol comes in a winning combination, it spins in a three-symbol stacked configuration and substitutes for all other symbols.

The Airship Wild Respins feature is triggered when you fill a reel fully with wilds. The airship wild moves one reel to the left, resulting in a respin. The respins will continue until the stacked wild appears on reel 1. After the stacked wild has disappeared from view, the final respin begins.

You’ll find a vault on the left of the reels. You can connect a gold coin to a standard symbol on any spin. The vault is filled with each coin, and it will open on any spin that requires a gold coin. This activates the Vault Bonus feature, in which you can win one of four fixed jackpot prizes.

After that, you’ll be given a choice of 12 coins. Icons that fit the Mini, Minor, Major, or Grand Jackpots are hidden behind them. Continue choosing until you’ve selected three that are similar. You’ll then be qualified for the jackpot:

Noble Sky excels in its design. It has a great look and sound.

The graphics have a high-end feel to them. A voyage aboard the Noble Sky, an airship, promises to be a comfortable way to travel. On each spin, you’ll see mechanical wheels come to life, accompanied by a mystical soundtrack that perfectly suits the theme. There’s a hint of steampunk here, but it’s a little more upscale than that. There’s plenty of atmospheres here, no matter how you describe it.

One thing we’ve noticed is that The vast majority of Microgaming’s video slots, as well as those produced by their in-house/partner studios, use royal symbols to deposit the game’s lower-paying icons. You’ll find the numbers 9, 10, J, Q, K, and A, which are written in an unusual font on the reels of Noble Sky. They don’t pay well, and even 5-of-a-kind variations are only worth a few times your stake, so you’ll want to concentrate on landing the higher-paying icons.

Three Characters, a Compass, and a Top Hat are among the theme-specific symbols in Noble Sky; all of these are “premium” icons in the game. The Captain is Noble Sky’s highest-value symbol, but he’s only worth 20X your stake for a 5-of-a-kind combination, so it’s nothing to get excited about. In the Noble Sky mobile slot, the high-class sounds and visuals meet very well. The gameplay here is simple and on the little screen works well. The visuals are great, regardless of the device on which you play.

The Noble Sky slot machine’s 5,000x your stake Grand jackpot is the largest possible payout, and a stake of 25.00 on the initiating spin equals a win of 125,000.00. This is a slot with medium Volatility, so you can expect to win regularly, and the average RTP is 96.12%.

Noble Sky is an outstanding game; the unique Steampunk-Esque theme reminds us about Thunderkick’s Riders of the Storm or NetEnt’s Steam tower. If you like high volatility slots and that kind of theme, Noble Sky is a game you should consider playing for real money.

We like that there are four fixed jackpots to win. While you won’t become a millionaire by playing, the slot’s overall win-potential of 5,000X your stake means it competes with many modern video slots and offers some excellent win-potential. It’s also worth noting that the daily bonus round features will result in some fairly sizable payouts, so it’s not just about the local jackpots!

Noble Sky is a solid effort from Neon Valley Studios, and while it’s unlikely to become a major success, we’d expect it to get a lot of playtimes.