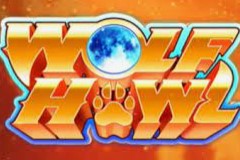 In this incredible Microgaming slot set in a forest during the winter, the Wolf howls at the moon. The Wolf, accompanied by various other creatures, will assist you in triggering exciting features that could lead to payouts of up to 25,000x your stake if you play it for real money at the best online slots sites.

If you’re a Microgaming fan, you’re aware that each of the company’s recent releases has a unique setup. The reels are not in the middle of the screen this time, but rather to the right, with a Buy Free Spins button to the left. The three-dot button, which controls the paytable, settings, and speaker, is located on the right side of the panel.

The paytable is accessed by clicking the star button. There, you’ll find the symbols as well as the payouts they have for their respective combinations. The lowest-paying card in the deck, From J to A, you’ll get 3x to 5x your stake back in royals. The Rabbit pays 6x, the Eagle pays 8x, the Bear pays 10x, the Reindeer pays 20x, as well as the Wolf, which is also the Wild, pays 30x for a 50-of-a-kind combination.

The Autospin button, which can be used to play up to 100 Autospins, is located below the three-dot button, followed by the chip button. You can change your wager here, ranging from 0.10 to 10 credits for the ten fixed pay lines. Last but not least, there’s the Spin button. However, before you push the spin button, keep in mind that the slot is fully compatible with both desktop and mobile devices. 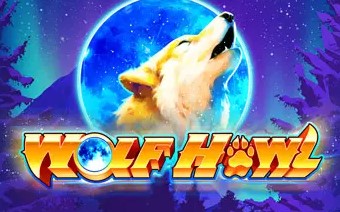 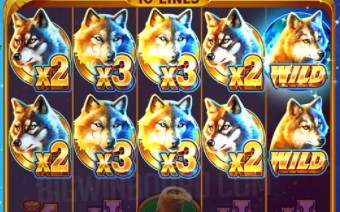 Wilds, multipliers, and free spins are all possible combinations in the Wolf Howl slot, and you’ll find all three in this game.

Multiplier wilds will appear on the middle three reels in the base game at 1x, 2x, and 3x multipliers. The values of multiplier wilds that appear in the same winning combination are added together. Land a winner with a 2x or 3x wild multiplier, for example, and the payouts would increase by 6x.

The scatter symbol is the moon. If you land 3, 4, or 5 moon scatters anywhere on the reels on the same turn; the Free Spins feature will be triggered, giving you 8, 15, or 30 free spins.

Any scatter on the reels unlocks the Wild Call feature before each free spin. The scatter symbols, as well as all symbols adjacent to them, become 1x multiplier wilds.

When a multiplier wild is adjacent to a scatter, its value is multiplied by one. A 1x multiplier, for example, is increased to a 2x multiplier. When a wild appears next to two scatters, the multiplier is doubled. During the free spins, multipliers can reach up to 5x. For the remainder of the feature, these upgraded multiplier wilds remain active.

This feature can be accessed at any time during the base game, and it adds two to four scatters to the reels.

If you don’t want to wait to activate the Free Spins feature, you can buy it. In addition, the RTP rises to 96.42 percent. Here are some options for you:

Depending on how many free spins you purchase, scatter symbols can appear on different reels. Importantly, due to Gambling Commission regulations, the Buy Free Spins feature is not available in the United Kingdom.

Wolf-themed slots are common due to the allure and elegance that these captivating creatures possess. The protagonist of Wolf Howl is the Northwestern Wolf, also known as the Rocky Mountain Wolf. This is the largest grey wolf subspecies, which can be found in North American forests and rocky mountains. They fly and hunt in packs as predators to supplement their carnivorous diets.

The setting in this scene is North America. We find ourselves in a snow-covered forest with golden light streaming through the leaves in the evening hours. The game’s graphics are vibrant yet gentle, giving it a simple, endearing appeal. Free spins begin on a rich blue backdrop, with animations adding to the excitement.

The game is accompanied by a light, almost mystical soundtrack with a Native American flavor. While some of the graphics and animations appear to be a little dated, they help create a memorable and distinct aesthetic that suits the theme well.

A to J wilds and a rabbit, an eagle, and a brown bear can be seen on the deep red reels. The moose is the most lucrative standard symbol, paying 3, 6, or 20 times your stake if you succeed in landing three, four, or five on a pay line. The Wolf represents the wild. This symbol replaces all other symbols and costs 5, 10, or 30 times your stake if you get 3, 4, or 5 of them in a row.

The RTP is 96.15 percent, and it increases to 96.42 percent during the free spins round. It’s also a high-volatility slot, which means there’s a greater risk of losing money but less consistency in payouts. There’s no progressive jackpot in this slot.

Wolf Howl has a rugged look and sound, but it also has a soft, almost mystical allure. Although the visuals and animations may not be among the best in the industry, it’s easy to get lost in the woods with the wolf pack, and the simple gameplay makes it even easier.

The low starting wager is ideal for casual gaming, and while high rollers might be frustrated by the top stake, we believe the possible rewards of up to 25,000x the stake are still sufficient. It’s a high-volatility slot with a good RTP that adds suspense and risk to each spin, as well as a nice variety of features that make the game entertaining, interesting, and potentially lucrative.