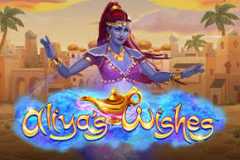 The story of Aladdin and the Genie who grants wishes is well-known, but Aliya’s Wishes is a slot in which the main character is a woman instead of Aladdin, though the rest of the theme tends to be identical. It’s also a game developed by Fortune Factory Studios, a Microgaming exclusive partner.
It’s an exciting game. Rolling Reels, Multiplier Trails, Stacked Wilds, and Free Spins are some of the major features that have been included.
The gameplay and features in Aliya’s Wishes aren’t particularly difficult. The game is played on a 5-reel, 3-row slot machine with 20 pay lines.
In standard mode, bet amounts range from 10p to £30 per spin. If you activate the Win Booster feature, the per-spin limits increase to between 20p and £60. If applicable, autoplay can be allowed. You can also play at normal speed or go into turbo mode if necessary.

How To Play Aliya’s Wishes Slot:

You have to follow a few basic steps to start playing Aliya’s Wishes:

Firstly, review the paytable to familiarise yourself with the features and payouts.
Make a bet size decision. There are wagers ranging from .10 to 60 coins.
Take a look at the autoplay options (up to 100 auto-spins can be played). The game’s buttons located in the bottom right corner can also toggle the quick-play feature and sound effects.
Enjoy yourself by pressing the spin button. 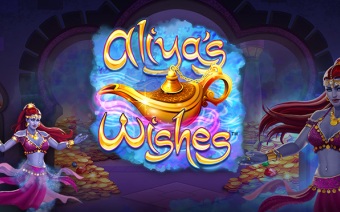 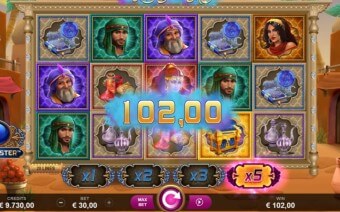 The tale of the magic lamp that can grant wishes is as old as time in the Aliya’s Wishes slot. The gameplay, on the other hand, is fully modern. Rolling Reels, stacked wilds, expanding wilds, and free spins all help to increase your odds of winning. Let’s see how things work out.

Aliya’s Wishes’ rolling reels aren’t your usual rolling reels; with each cascade win, you’ll get a progressive multiplier. When you come up with a winning line, the symbols that made up the line will cascade from the reels and be replaced by new ones. It offers you another opportunity to make a winning line.

A progressive multiplier will be enabled for each subsequent win. In the base game, it begins at 1x and goes up to 5x the win. If the Win Booster is turned on, the payouts are compounded by 2x until they hit 21x.

On the left-hand side of the reels, a Win Booster button will help you increase your chances of winning. It increases your multipliers and doubles your wager.

As a result, your multipliers increase as follows during the base game round:

Much more generous multipliers are available in the base game:

The magic lamp scatters symbol is required to enter the Free Spins round. When three, four, or five of them pitch, you’ll get 10, 15, or 20 free spins. The Rolling Reels feature is also used in the free spins round. On your first roll, the multiplier is set to 2x. It increases to 5x on your second roll. On the third roll, it expands to 8x. The multiplier is 21x on the fourth roll. The multiplier size in the main game and free spins has increased significantly. When we consider the scale of the multipliers, we automatically think of Gonzo’s Quest. The multipliers are even bigger if you use the Win Booster feature!

The Aliya’s Wishes slot is a sensory overload. The vibrant graphics in this game are fantastic. They’re jam-packed with info and have a lot of atmospheres. All of the symbols contribute to the theme, set against a backdrop of an Arabian village. Palm trees and billowing clouds surround the reels as the game takes place in an Arabian bazaar. It includes symbols such as diamonds, swords, spellbooks, and the story’s main characters.

It’s the traditional tale of the lamp’s Genie, who grants wishes to whoever sets him free. Instead of Aladdin, who is normally the hero, it is a girl named Aliyah who does it. It’s a high-end game, and even though some of the low-value symbols display bags with various colored gems, it’s still easier than getting Royals. You’ll find additional symbols like the Genie, Vizir, Prince, Sultan, knife, paper scrolls, jewelry bags, books, and jugs. On a smaller screen computer, the ornately crafted graphics look fantastic.

Aliya’s Wishes has a fantastic theme and graphics that provide players with an exciting gaming experience. It looks amazing and immediately draws you in, as you would expect from a Microgaming slot.

The gameplay, on the other hand, isn’t entirely original. In Jungle Jim El Dorado and Lara Croft Temples and Tombs, you’ll find the same combination of rolling reels and growing multipliers. If you like those titles, Aliya’s Wishes is for you.

The use of the Win Booster is the key difference between this game and the others we’ve already described. Since multipliers of up to 50x are possible when you double your bet, you can get some pretty amazing payouts. As a result, it’s a distinguishing feature that can significantly difference your ability to win.